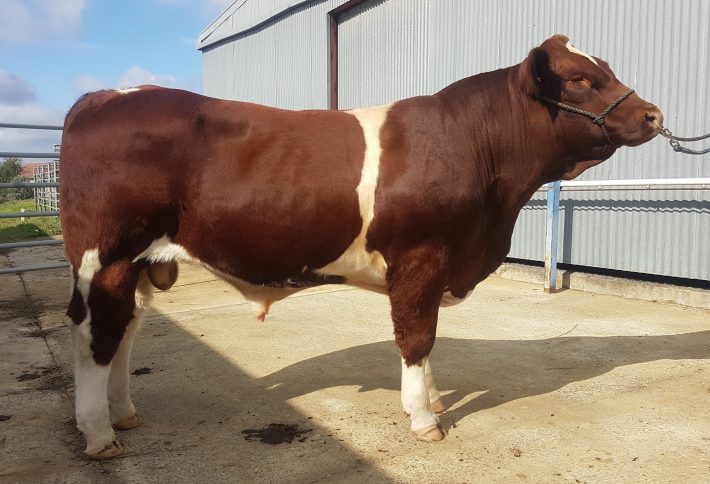 The 2017 Maine-Anjou Beef National Sale was another great success with studs from NSW, South Australia and Victoria making the trek to Bendigo. Bulls averaged $4266.00 and females averaged $3050.00.

The vet said that he was happy with the lineup of cattle and inspections went well with cattle scores all good and only one animal put out due to a problem on the day.

The top priced bull Tickalara Bullseye a lovely soft, red and white bull was offered by Emily Hurst from Tickalara Maine-Anjou of Gunning NSW he was purchased for $5000.00 by Ron Crack who has a growing herd of Maine-Anjou cattle in Currie, King Island.

Top priced female was a black heifer, Maine Park Latoya offered by Clint Worden and Bridgid Fry from Maine Park in Knowsley was purchased by Eva Worden of Anjouliette. The heifer started at $5500.00 and after competitive bidding the priced reached $7400.00. Eva will add Latoya to her all red and white stud to start her new line of blacks.

Junior member Jared Mackelmann aged 13 of Bluedrop Maine-Anjou of Congupna was the winning bidder of Wattle Glen Maisy 2nd. Jared will add his new heifer to his growing stud and is looking forward to the future breeding and showing with Maisy.

The Sale committee would like to thank all members who entered cattle, the buyers, and all those who attended as there was quite a bit of interest judging by the crowd.

We would also like to thank Ray Attwell, Andrew Embling and their helpers from Landmark for their continued support.

We are looking forward to the Sale in 2018 which will be bigger and better and we encourage more vendors and buyers to get involved.